Give me some polygons, nature and light: you will immediately catch my attention. I recently bumped into two different works which I would like to spend some words on. 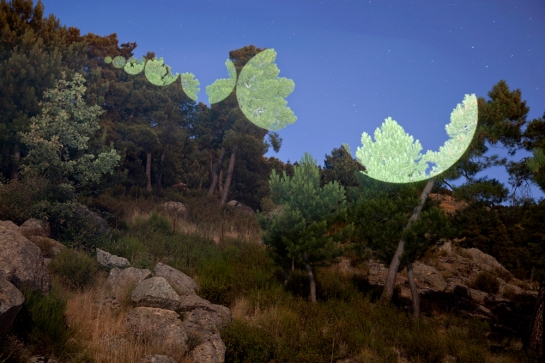 The first one is the the project of a spanish artist, Javier Riera, who created spectacular perspectives projecting geometrical shapes on a natural landscape. The result is a suggestive painting, where light adds depth and volume to the natural canvas and geometry gives abstraction to the view. As the artist said in an interview, “geometry has the quality of representing the driving forces of nature that are not visible, the immaterial design of things, the origin of energy and matter”. The projection of scattered geometrical shapes into such context makes me feel out of place and wonder wether the view is real or not.

Cambodian Trees, by french artist Clement Briend, is the second project that drew my curiosity. The work is based on the digital projection of images from cambodian spirits and deities on big trees in different urban areas of Phnom Phen. The projections want to be a visual representation of the divine spirits that live in our world. They have a powerful impact that creates a sort of spiritual aura in the urban environment.

In both cases the projections create an effect which is halfway between sculpture and installation, and light, together with the natural element, gives the pictures an unusual depth, and a mesmerising effect to our minds.

Sometimes fireworks are not needed to create special effects. Sometimes we can reach an high level of beauty with very few simple ideas. Nature can do its part and make our job easier.

That’s the case of Edge Effect, a photographic project by Daniel Kukla, a young photographer with an interesting background in biology and anthropology. Awarded with an artist’s residency by the United States National Park Service in Joshua Tree National Park, California, he spent long time in the area between Sonoran and Mojave deserts. It is here that he documented, in a very simple and effective way, what ecologists call The Edge Effect, that is, the meeting of different ecosytems in the same natural environment. To record this phenomenon, Daniel Kukla choose few basic elements: a mirror, a painter’s easel and his camera. Reflecting a piece of a landscape in the mirror, he combines in the same picture two different images, two (sometimes) contrasting parts of the same natural scenery. The result is a fascinating game of lights and perspectives, that emulates the feeling of an hyperrealistic painting, placed within an open air museum in the middle of  the desert.

Kukla’s project reminds me a series of paintings by Magritte (titled The human condition, 1933/1935), wherewhere the landscape on the background of the canvas is exactly reproduced in a painting lying on a tripod, that can be seen in the foreground. The two images are placed on two different levels but they are one the sequel of the other. The Edge Effect is the exact opposite of Magritte’s artwork but, as in Magritte’s paintings, the different natural sceneries shown are part of the same setting or, better, they are the same environment. Perhaps, the end result is as powerful as the one produced by the belgian artist.

In The Edge Effect, nature is free to express itself without limits and filters, just a mirror as a canvas, revealing its grace. 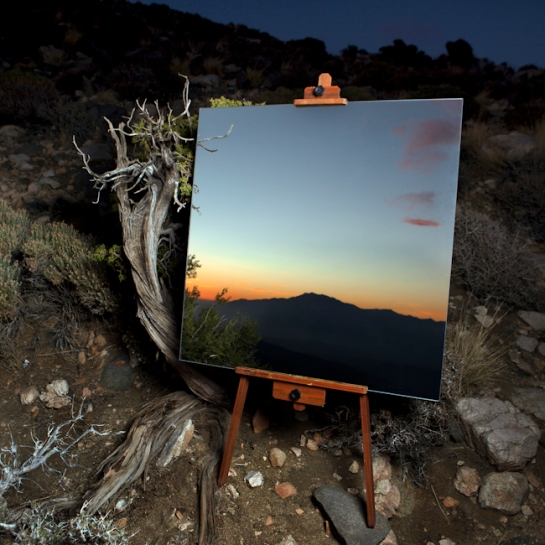