The city of Essen, this year’s nominee as the European Capital of Culture, decided to take advantage of its position to start a radical change in the Rhur, the region where it is located in Germany. Essen for the Rhur 2010 is the name of the program, which aims is to create a new metropolis in Europe, the Rhur Metropolis: no more old an abandoned industrial areas, but art and culture centres instead.

Their slogan is “Change through Culture – Culture through Change!”, as to say, they want to transform the largest coal mine in Europe into a lively district through culture and art: for this aim, three hundreds projects will be realized in various cities and towns of the zone.

An example is Still life A40: the 18th of july a lunch event was organized on the highway 40 (the most intensively used highway in Europe), which stayed close all day long to celebrate the everyday culture of the Ruhr through music, food and performances. 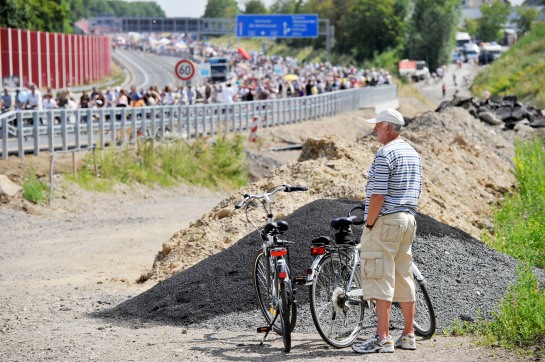 Another project is the Shaft Sign, made with balloons marking the spots of former coal-mines. 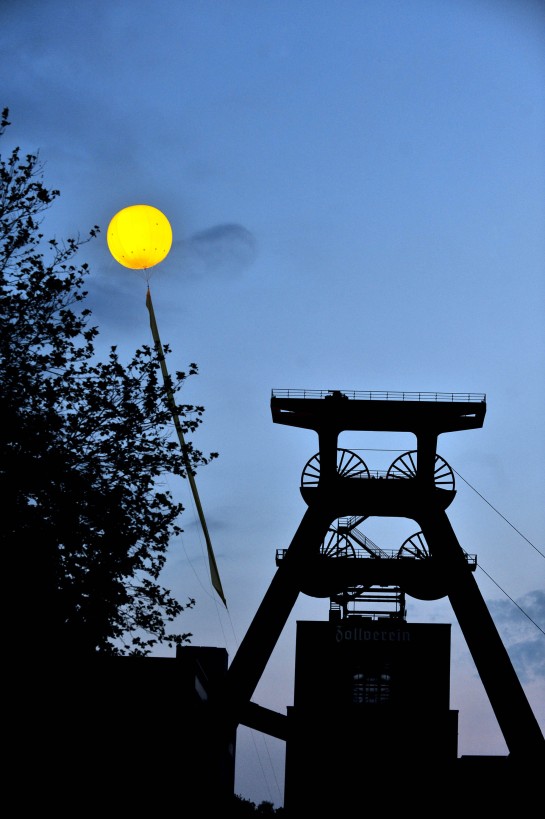 But the most interesting project is the Light Ruhr 2010: artists, architects and designers created light installations in different places of the Ruhr, in order to show in a very visible (and visual) way the ongoing change of the area. Some of the works are installed into the coal mines, transformed into rich and lively public spaces, like in the Landschaftpark in Duisburg Nord, but also in other sites with a different quality of space like the Zentrum für Internationale LichtKunst in Unna. 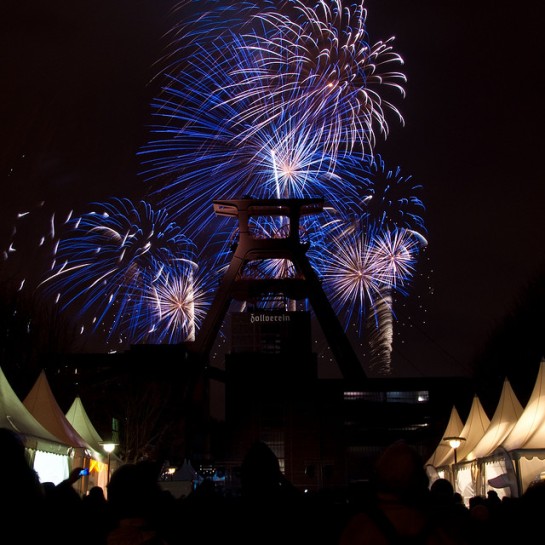 The Landschaftpark in Duisburg Nord was an old steel and coal mine abandoned in 1985, then transformed between 1991 and 1999 into a landscape park by the architects Peter Latz+Partner. The new transformations create a strange relationship between industrial archeology, art and landscape, which looks charming and fascinating to our eyes.

Industrial archeology has come back to life. The Bechers would be proud.

Last november on the Abstract City blog of The New York Times a funny post appeared. His author, the illustrator Christoph Niemann, played with the concept of bio-diversity, modifying the shape of leaves in many different ways, producing not just the ordinary butterflies’ collection, but few original samples of very nice custumized leaves and fruits. Nothing else to say, just watch and enjoy!

Can Felipa Civic Centre, in the very heart of Poblenou in Barcelona, the old factory workers’ district, nowadays renewed and transformed into an art and culture centre, is hosting till 19 of june an interesting exhibition of young artists titled Paradis Perdut, alg(unes) mirades al voltant del jardì. The works exposed are built around the theme of the garden and the contemporary loss of “paradise” in our city, where a green space is often like a hidden treasure (expecially in Barcelona); all the works together contribute to write a redemption song calling for the lost paradise. What is shown is a series of thoughts about the idea of garden and about its contemporary condition.

We would like to focus especially over two particular projects of the exhibition. The first one is “Degradado, Jardin Ambulante” by Cecilia Martin, an installation made from five bins painted in a degrading color scale from black to white; in each bin stands a cypress tree, growing in height toghether with the bin growing in brightness, as a symbol of the meeting between industry and nature. It is literally a moving garden through Poblenou’s district, trying to start  a dialogue about the green areas and the intense urban renewal of an industrial space, mirror of the change of an economic paradigm.

The route of the garden consists of eight stops, all of them located in strategic places where, years ago, there were factories or workers’ housing.

Following the garden we can walk the path of the transformation of the spaces in the context of a contemporary-faced city, where the industrial past is only a (romantic?) memory, with a critical eye in front of the lackness of green.

Another work by the same artist, Natura Viva, reminds us the Mobile Garden of Tatfoo Tan, which we already described in this post. 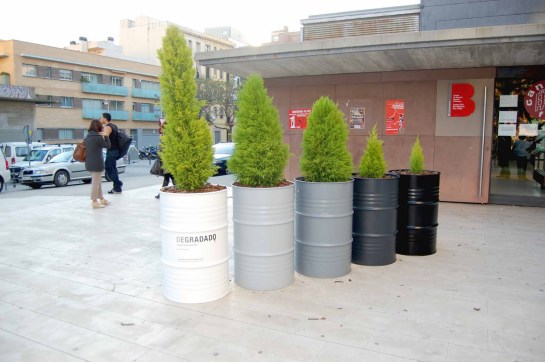 The second project we would like to talk about is Julie Houle‘s Patch; based on the concept of “object trouvet”, manipulated and repaired. In  a series of postcards we can find maps of the streets of Poblenou with a mark in every place where the artist stopped to repair parts of “broken” natural elements, such as trees, leaves or stones, with different materials. Examples of this patchworks are shown in the exhibitions inside glass boxes. Putting one beside the other natural and man-made materials, the artist wants to give a ludic and ironic sense to her work, revealing at the same time the uniqueness of nature. The apparently useless repair tries to make us indulge in a reflection about our environment, underlining with these little interventions the need to focus on bigger topics.

This work reminds us the one of Nina Katchadourian for “Platform 21”, who carefully repaired dozens of spiderwebs. We believe that the “repairing nature” is more than a work of art and helps us facing realities we have always ignored or considered as independent and self-sufficient, but that nowadays really need all of our attention. 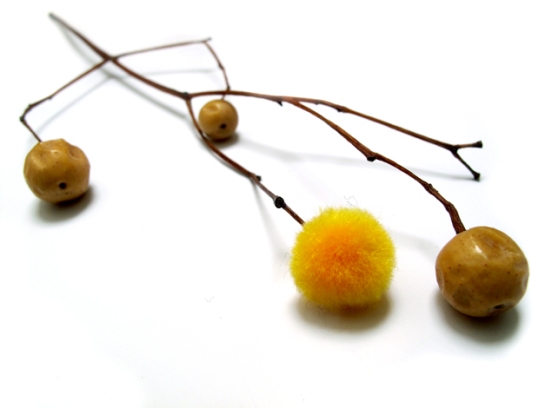 In october 2009, for the festival Art in Odd Places in the city of New York, the artist Tattfo Tan created the work Mobile Garden.

The project involved groups of citizens, students and artists who walked down the city’s streets bringing wheeled objects – from baby buggies and shopping carts to old suitcases, from chairs to skateboards. What you could see above these objects were no babies, food or clothes, but every kind of plants and flowers. The intention of the artist was to place all little mobile gardens in particular spaces, pointed out previously with some signs (which said “Plant here!”).

The perfect locations for plants were pieces of land unused and neglected or out of sight corners. All the pointed spaces were collected in a map, distributed to people in the neighborhood.

The use of particular objects, usually found abandoned or lying along the streets (shopping cart, baby buggies) powers up the performance, involving a level of provocation and reevaluating classic symbols of poverty and urban decay. 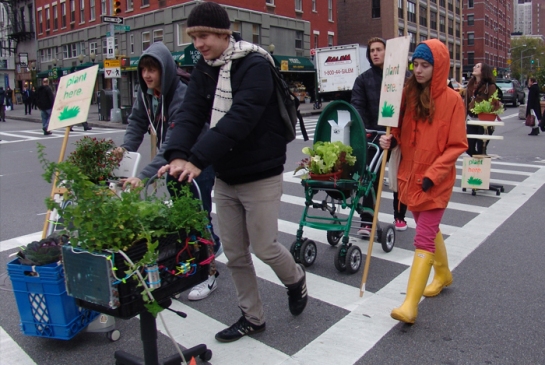 By placing the plants in abandoned spaces, the artist wants to invite people to reflect upon unexplored possibilities of urban land use, particularly about the lack of parks and green public spaces.
The performance is going to be repeated in june, 5th 2010, in Staten Island (NY), for a Mobile Garden Expo, but in the meanwhile it inspired some other similar works: the artist Shannon Young, on february 2010, presented a project very close to mobile garden in the Umami, Food&Art Festival in New York city.

Talking about Mobile Garden, we’re not saying anything particularly innovative: the japanese architect Gen Yamamoto (NL Architects), during the ExperimentaDesign Amsterdam in 2008, conceived a sort of “forest” made by a hundred of shopping carts scattered around the city, in which he planted trees and plants. This way, he wanted people to interact with his installation and “adopt” a tree, to make the city greener.
Other examples could be find in the Green Island workshop, developed every year in Milan in correspondence with the famous Design Expo Salone del Mobile. In the 2009 edition the work Bike Cart and Portable Garden was presented, which totally reflected the Mobile Garden of Tattfo Tan, moving little gardens above bikes an mobile containers.
More than this, in 1994, Lois & Franziska Weinberger, a couple of austrian artists, created Portable Garden putting plants and flowers inside little bags or different containers. The past is a good teacher.

All images taken from http://www.tattfoo.com/projects.html

During the first edition of the ExperimentaDesign in Amsterdam Biennale in 2008, a project was realized under the name of Urban Play. The project is deeply analyzed by Scott Burnham in the catalogue who presents the event: “Droog event 2, Urban Play“. Here, Burnham tells us about the slow falling of our cities into a uniform pattern made of basic, common elements, such as housing, streets, transports, sidewalks, public spaces and so on.

Nevertheless, a touch of individuality is starting to appear – he argues – in the everyday urban structures, thanks to the big potential of human creative intervention. Only the effort and strength of citizens’ participation can bring back a little bit of human scale in the alienate contemporary city.

Urban Play is a project made of individual, semi-illegal works, often breaking laws or rules which discourage the spontaneous intervention of the citizen in the urban contest; all the interventions analyzed in the book are equal answers to the alienation of the contemporary city inhabitant. 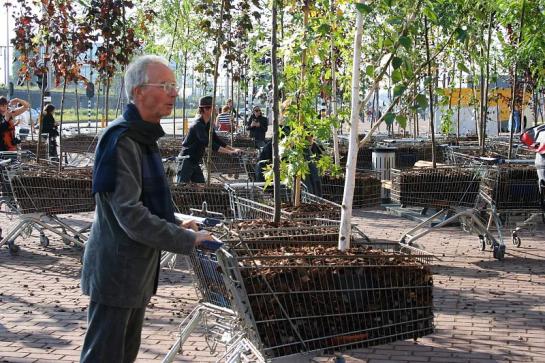 Talking about “urban art”, usually known reductively as street art, such as graffiti on walls or, sometimes, galleries, the still undeveloped borders of this artistic scene show another reality, looking forward to a new model of urban design, made of citizens interaction with every-day’s surroundings through creative interventions, a sort of a DIY operation, made by people for people, without any license or order.

This kind of “hacking culture” or “artistic disturb” plans the use of old urban elements, in order to obtain the highest benefit for people around them. We are looking to an experiment, maybe a vision: human potential and landscape are cooperating together in the chance of creating a new idea of contemporary urbanism.

“Canada. Living the American dream without the violence since 1867” said the t-shirt of a guy I met once.  From the peaceful Canada comes a peaceful urban guerrilla. I’m talking about three young artists from Toronto who want to revalue the neglected areas of their cities through their work.

The first one is known as Posterchild and creates public installations thought to interact with their sourroundings. Planter boxes made of wood and full of flowers are hanged up on lampposts, walls or traffic lights, while empty flyer-boxes are transformed into unusual containers for any kind of plant. Posterchild creates his works with the flotsam of the urban environment, he just processes it and return it to the city. The uselessness of these objects could be an opportunity, for artists and people, to act and dialogue whit the metropolitan contest, where the green is often absent.

However, the most original idea is the Poster Pocket Plant project, a work of two other artists who find the way to bring a bit of nature in our everyday city life: Sean and Eric create some “hacking” installations with the typical urban furniture: they tear pieces of billboards and roll them up in order to create a sort of a pot where to put some soil and plant flowers. In this way, they want to show people the enormous potential of public space and teach them to look at reality  from a different point of view.

Both projects fall within the category of “DIY urban design”, as Scott Burnham describes all kinds of artworks born outside the official panorama of contemporary art, a new fresh underground culture which starts to emerge in our city.